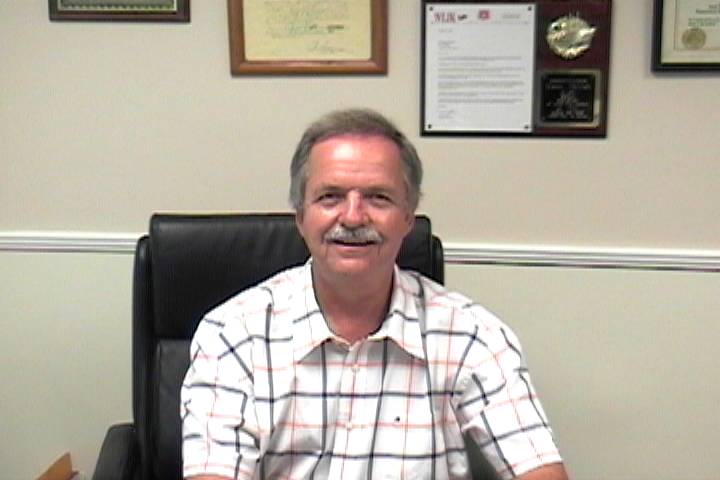 Glen McNish
Glenn McNish began his broadcast career at the ripe old age of 14, when he became the youngest person in East Tennessee to pass the FCC examination for a commercial broadcast radio license.  Glenn was literally born into country music because his dad, George McNish custom made guitars, mandolins, fiddles and other instruments and did repair work on the instruments of many of the stars of the day.  It was not unusual to have folks like Don Gibson, Bill Monroe, Archie Campbell and many others at the Mcnish household getting repair work done and having instruments made.  Glenn’s dad along with his brothers and sisters all performed country music as well.

During his sophomore year in high school, Glenn worked on WKCS in Knoxville. During his junior year, he worked for George Mooney at WKGN on the UT campus / Cumberland Avenue strip. George Mooney was the ‘Voice of the Vols’ at the time, (before John Ward) and Glenn developed a love for play-by-play sports during this time. He also had the opportunity to work with legendary announcers Bob Baron, and Dr. Al Adams.

During his senior year in high school, Glenn wanted to get into the country music radio broadcast industry and landed the afternoon drive-time slot on WGYW, which at the time was the only true Country station in Knoxville. WGYW was located in the basement of the Farragut Hotel on Gay Street, and was the home to D.J.’s like ‘Big Jim’ Hess, who later went on to television fame.

As fate would have it, WGYW got sold to Soul singer James Brown in June 1966, about the time Glenn graduated from high school. Brown brought in the top black D.J.’s from around the country and changed the name of the station to WJBE- (James Brown Enterprises.)

The D.J. who was supposed to take Glenn’s place in the afternoon drive-time was named ‘Daddy-O’ Lark. Unfortunately, he was in jail in New Orleans for non-payment of child support and alimony. James Brown asked Glenn if he would stay on for two weeks until ‘Daddy-O’ Lark got out of jail.

At the end of the two weeks there was still no ‘Daddy-O’ - and Glenn stayed on for another two weeks. In the meantime, Glenn had applied for a job on WLIL, the country music station in nearby Lenoir City. He was hired almost immediately by WLIL’s owner, Arthur Wilkerson.

Glenn said, “I still remember telling the James Brown staff that I had taken the job on WLIL, and that would be my last week at WJBE. They insisted I call Arthur Wilkerson and ask him if he would agree to let me stay at WJBE ‘til ‘Daddy-O’ got out of jail.”

“I remember that conversation distinctly. I said, “Mr. Wilkerson, the James Brown folks want to know if you will agree to let me stay at WJBE for another two weeks?”

“Wilkerson said, “What time is it?” I said, “11 AM.” He said, “What time are you supposed to be here?” I said “12 Noon.” He said, “Well, if you’re not here at Noon, forget it!” I made a hasty departure from WJBE, and thus began what would become a lifelong country music radio career on WLIL.”

Glenn’s first day on WLIL was July 4th, 1966, and he did a live broadcast from a big field in Philadelphia, where they were having a land auction.

Glenn started classes at the University of Tennessee in the fall of 1966, while continuing to work at WLIL. The following year (1967) WLIL, which up until then had been a daytime-only station, became authorized by the FCC to do night-time broadcasts. Arthur Wilkerson asked Glenn, in addition to being a country DJ, to become the voice of the Lenoir City Panthers’ football, basketball, and baseball teams. This fulfilled Glenn’s dream of doing play-by-play sports as well as being a country music DJ.

Glenn said, “I really thought I would be doing the country music and Lenoir City Sports for four years ‘til I got through at UT. By the end of the four years, the sports broadcasts and country music had developed into a labor of love.” Now, fifty- years later, ‘Lenoir City Sports with Glenn McNish’ is the longest-running play-by-play sportscast in the history of Tennessee, at either the college or high school levels as far as being the only person to do the same team on the same station for 48 continuous years.

After UT, Glenn continued working at WLIL, serving in a variety of capacities, and ending up as Vice-President and General Manager of the Wilkerson Broadcast Group, which owned five radio stations at one time.

In 1999, realizing that the country music he had grown up with had changed dramatically, Glenn changed the format of WLIL to Classic Country and called the station “The Legendary AM-730-WLIL, Since 1950.”  It was an instant hit and the station continues to broadcast the classics that range from 1944 on up to today’s classics that maintain the traditional country sound.

In addition to all of the duties as on air personality and General Manager, Glenn is in his 48th season as the ‘Radio Voice of the Lenoir City Panthers,” broadcasting Football and Basketball games. He also anchors the popular ‘Election Watch’ programs which air on election nights, and features interviews with the candidates for various offices. You can also hear Glenn on a variety of other feature programming throughout the year including co-host of the “Marshal Andy and The Riders of The Silver Screen Radio Show”  featuring classic country.  Artists on the show have included Rex Allen, Jr, Jim Ed Brown, Lew DeWitt (Statler Bros), Phil Campbell (Archies son) and many others.  Glenn is also  the emcee of The Tennessee Opry, a live stage show that features country artist from around the country.

In November of 2008, Glenn took on a new role as the elected vice chairman of the Lenoir City Board of Education.